CSG and the danger of open exploration holes

CSG and the danger of open exploration holes

If the water is removed from the coal seams as planned over such a vast area of Queensland we are going to see uncontrollable volumes of gas leak from open mineral exploration test holes and we will also witness the depletion of many of our aquifers via these holes. This will be without a doubt the greatest environmental disaster ever on inland Queensland. There are countless thousands of these holes left open and not sealed across the state. There is no requirement for the mineral industry to record the location or any other information about these test holes to any authority so their whereabouts, depth and formations drilled through is mostly unknown making it impossible to predict the interconnection between the aquifers by any hydrologist. Yet the government and the department still refuse to regulate or place controls on the mineral exploration industry. They show no respect or care for our ground water systems whatsoever.

I am a water driller and my career of 35 years has taken me across a large percentage of Queensland and I come across these holes nearly everywhere I go. I wish to raise some concerns I have with the integrity and the accuracy of the Queensland Water Commission Surat Underground Water Impact Report.

The Queensland Water Commission has made bold predictions on the impact the dewatering of the Walloons will have on other aquifers without taking into consideration these open test holes. It is humanly impossible to calculate the effect they will have as there are no records available of these holes that may date back 50 to 60 years when portable rotary drilling rigs first became readily available. Also there is still no legislation today that requires the sealing of these holes drilled by mineral exploration drillers. Everyday another hole is drilled through these aquatards and left open their permeability is increased by an unpredictable degree. In 1994 I was at a drilling seminar in Dalby where a senior hydrologist with the department of natural resources and mines presented a paper on the Abandonment of Test Holes and Bores. Some of the points he made to why this is a very important practice to properly seal these holes are.

This was presented in 1994 long before the advent of coal seam gas which requires the dewatering of the Walloons to release the gas and in turn creates a huge pressure differential between the aquifers.

At every drillers meeting or seminar I have attended over the last 35 years this practice of the mineral exploration industry leaving holes open and not sealed has been mentioned and complained about, but the department and the government continue to refuse to act on this situation.

If I, as a licensed water driller, were to leave a hole open and in this condition I would be prosecuted and be fined a possible $50,000 by the department because of the risks I would create to our ground water supplies. Yet the same department says it is OK for mineral exploration drillers to leave test holes in this condition. They apparently don’t create the same risks.

The Department of Natural resources and Mines along with the State Government have over the years placed many restrictions on ground water use and also the drilling of new water bores in an effort to save our so precious ground water reserves. The most recent being a moratorium on the drilling of new water bores in towns within the Murray Darling catchment because the water system has been over allocated. This is a very hypocritical view of the department and the government because with the dewatering of the coal seams it is only going to take one of these exploration holes that are left open through a multiple aquifer system to deplete very large volumes of water from any one system.

I have had reports from employees on exploration rigs where they have been core sampling at 800 metres and when they were finished they just pack up and drive away and leave the holes open.

It will only take one hole left open through the Condamine Alluvium to the Walloon coal seams to delete more water from the Alluvium aquifers than all the stock and domestic bores within this system put together.

One hole through the Bungle and Mooga formations, the Gubberamunda or the Springbok formations would be capable of leaking enough water to have a serious impact on any one of these aquifers with the dewatering of the coal seams.

Any holes drilled into the Huttons will also cause serious losses from this formation as the Huttons are under a great deal of pressure. At 600 meters the vertical upward pressure of the Huttons would be in excess of 800p.s.i.

I know first-hand how tight and dense these shale layers or aquatards are as I have drilled through them many times constructing water bores. But they are of no value as a confining layer when drilled full of holes and left open.

In the Surat Underground Water Impact Report it states “The degree of interaction between the coal units which form part of the Walloon Coal Measures and the overlying and underlying aquifers is directly influenced by the vertical permeability and the thickness of the aquatard layers.” 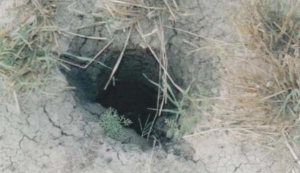 So as the water table is lowered within the Wallooons to release the gas there will be an uncontrollable movement of water through these aquatards via the countless thousands of holes that have been drilled and left open by the exploration drillers.

Also as the gas pressure increases due to the lowering of the water table there will be uncontrollable volumes of gas able to escape to the atmosphere via these same holes. Therefore this Surat Underground Water Impact report has little credibility.

Not until every hole is located and sealed to a satisfactory standard could any hydrology report carry any credit at all.

Ian Hansen is an experienced water driller and a committee member of the Basin Sustainability Alliance (BSA).